Unless you live under a rock you know about the true-crime obsession sweeping the nation. One of the most popular ways for individuals to get their true crime fix is through podcasts, telling audiences chilling cases during morning commutes or their evening runs. It seems like every true crime story to be told has surely been covered.

Given the expanse of true crime podcasts, it’s interesting to think about the trends in story type, coverage and popularity.  Luckily, a new study from Casefleet crunched the numbers around four of the most popular podcasts, My Favorite Murder, Crime Junkie, Sword and Scale and Criminal, to provide some statistics about the true crime stories we can’t get enough of.

First, the survey compared all four of these major podcasts to see which true crime stories were covered by multiple podcasts. While, surprisingly, no one story was covered by all four podcasts, there were still some cases that gained multiple points of coverage. Most notably, My Favorite Murder and Crime Junkie covered 16 of the same stories, including episodes about serial killers Israel Keyes and the Golden State Killer.

Indeed, serial killers were a major focus of podcast coverage. According to the analysis, just under 20% of all cases covered by the four podcasts were about serial killers. Speculating on the reasons for our society’s collective interest in serial killers, psychologists have pointed to the unassuming nature of killers’ public persona, according to an article from the BBC. 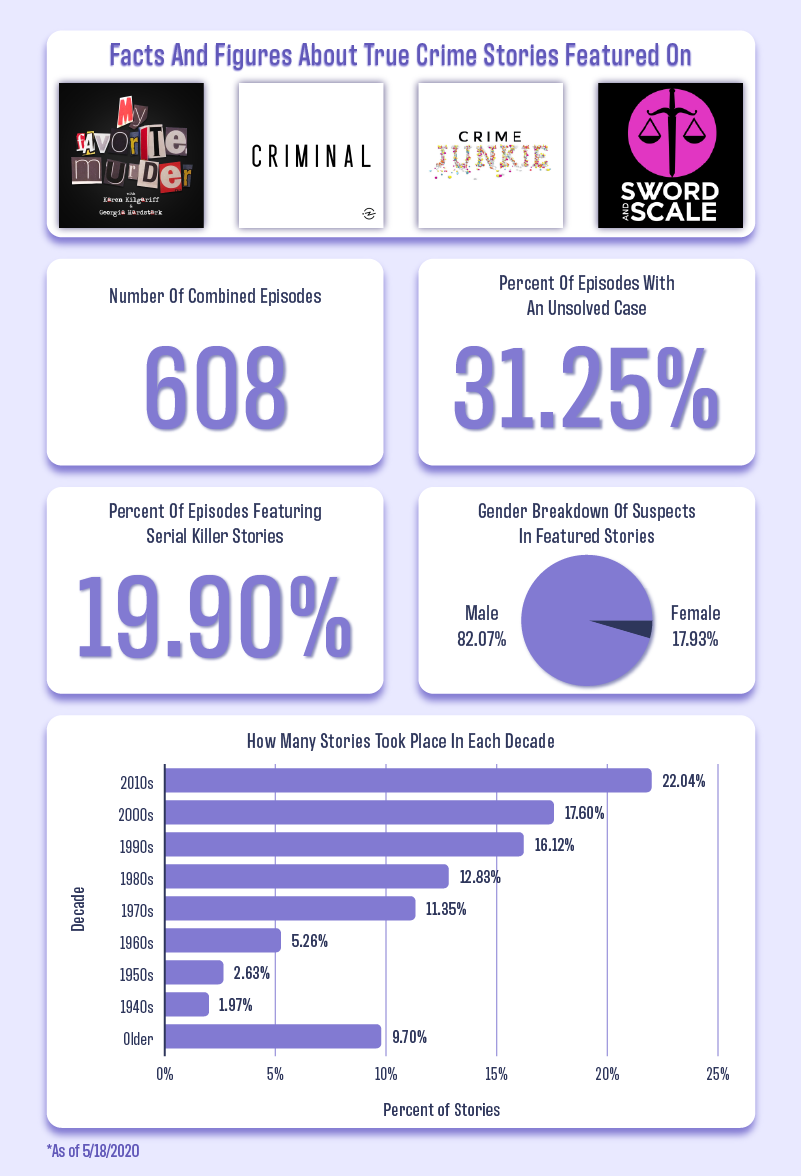 Another interesting statistic that emerged from the four podcasts was slightly unnerving. Over 30% of the 608 cases discussed by the podcast hosts were unsolved. However, listeners’ interest in these cold cases may actually be a good thing.  As was reported in a recent story from Rolling Stone, recently, some podcast fans who had listened to an unsolved murder case through a podcast were able to contribute DNA evidence to the eventually successful investigation.

Finally, the study created a timeline to see when the majority of the total analyzed cases took place. The trends indicated that coverage increased each decade leading up to the present, with about 5% of cases having occurred in the 1950s through about 22% of cases having occurred in the 2010s. Interestingly, as reported in an article from The Atlantic, as the general public has a greater understanding of the legal process due to social media and intensive news coverage, the public investment into evolving cases may be more intense than it was in the past.

Overall, it’s clear that the public’s fascination with true crime, especially in-the-moment mysteries, has no sign of stopping. And as we all look for our fix of true crime, there will be plenty of podcasts vying for our ears… even if we need to keep one eye open.